Eats: Psychotic Cookbook #1 And A Recipe From It

Hello! I need to begin this post by explaining what I mean by "psychotic cookbook". I have a nice little cookbook collection, ranging from vegetarian (Moosewood volumes) to budget (More-With-Less)to old standbys like The Joy Of Cooking and a retro Better Homes And Gardens. There's certainly plenty of delicious recipes in these cookbooks, but no real over-the-top indulgences in any of them.

For that, I have this: 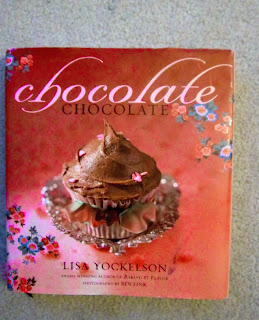 I first encountered this cookbook at the local public library, where I was taken in by its heft (almost 500 pages) and lush photography. It's rather like a coffee table book, so I would check it out on occasion to swoon over the recipes and drool over the pictures. I even baked a couple of recipes from the cookbook, but there were too many I wanted to try to make it worth my while to photocopy them.

Then a year or so ago I couldn't find it at the library, even after repeated shelf checks. A glance of the online catalog confirmed that the cookbook was no longer in the library's collection.

I kept an eye out for Chocolate Chocolate at thrift stores, but before I encountered a copy there, I came across it at Autumn Leaves, a used book store in Ithaca NY last summer and bought it as a "souvenir" of our vacation.

So, why do I call a cookbook I thought enough of to purchase "psychotic"? I'm actually using this term affectionately, as Yockelson is an accomplished baker and cookbook author. But the recipes in this cookbook really are incredible. They are among the richest I've ever seen in the chocolate category! Thus, I joke to my husband that Yockelson must have been on some sort of psychotic drug when she wrote it.

For instance, the recipe for "Peanut Butter Candy Caramel Bars". It starts with a rich brownie-like base loaded with over 1/2 pound chopped Butterfinger candy bars. After the baked bars have cooled for an hour, they're crowned with "Turtle Topping", a concoction of melted caramels, milk and vanilla.

Not into Buttefinger candy bars? Not to worry, there's a similar recipe, "Coconut And White Chocolate Dream Brownies", which has Mounds bars, plus the two ingredients mentioned in the recipe's title added to the batter.

Or maybe you'd rather make "Chocolate Nougat Squares", in which Milky Way bars add flavor and texture to the goodies. No added chips or sauces, but I'm sure it's still plenty rich!

There's an intriguing chapter called "Chocolate Bread", which includes a double-chocolate version of cinnamon rolls (chocolate-y yeast dough, chocolate filling), and a pastry that calls for chocolate chips in the dough, the cream filling and the streusel topping - what a trifecta!

I could write a lot more about this cookbook, like "Deep Chocolate Pound Cake" (a full cup of baking cocoa in that one) or the "Chocolate Fudge Sauce" that Yockelson says to rewarm to a "soft, compassionate bubble" (another goofy charm of this cookbook - her extravagant prose!)

But since I mentioned a recipe in this post's title, I'll supply it now, the dessert I made my chocolate-loving husband for Valentine's Day: (my notes will follow the recipe).

Preheat the oven to 325. Film the inside of a 9 by 9by 2-inch baking pan with nonstick cooking spray.

Sift the flour, cocoa, baking powder and salt onto a sheet of waxed paper. In a small bowl toss the chocolate chips with 1/2 teaspoon of the flour mixture.

In a medium bowl, whisk together butter and chocolate until smooth. In a large mixing bowl, whisk the eggs until well blended, add the granulated sugar and whisk for 30 seconds to 1 minute to combine.  Blend in the melted  chocolate/butter mixture and the vanilla extract.combined.  Sift the dry ingredients over the liquid mixture and stir the two together until all particles of flour are absorbed into the batter. Stir in the chocolate chips.

Scrape the batter into the prepared pan and spread evenly. Smooth the top with a rubber spatula.

Bake until the center is set, about 35 to 37 minutes. Remove and set the pan on a wire rack to cool for 5 minutes while you make the frosting.

To make the frosting

In a large mixing bowl, add confectioners' sugar and salt.

In a small bowl, whisk together butter and chocolate until smooth and pour over the sugar. Add the  the milk and vanilla extract. Using an electric hand mixer, beat the frosting on moderately low speed until creamy. Scrape down the the sides of the mixing bowl once or twice to keep the frosting even-textured.

Carefully place dollops of the frosting  layer evenly over the surface of the just-baked chocolate layer and spread it over, using a spatula or flexible palette knife. Use smooth, quick and light strokes. Be careful not to dig into the fudgy layer beneath.

Cool in the pan on a wire rack for 4 to 5 hours, or until completely set. Cut with a small, sharp knife when cooled.

My notes: more typically, brownie recipes are baked at 350, so that's what I did. Perhaps my vintage 9x9 baking pan is shallower than modern pans; this batter filled the pan up to its brim. But then again, I've seen brownie recipes with identical ingredient proportions baked in 13x9 pans. Thus, I felt if I didn't make some adjustments, I would surely end up with a soupy mess instead of brownies. Brownies can be tricky to bake as it is since the edges can look done before the center has a chance to set. I baked these brownies at 350 for 30 minutes; the edges were done so I pulled them out then.

I don't know if the higher oven temperature at a slightly reduced time made any difference in the finished product, for I had a bit of trouble with the frosting. I made it as specified and followed the five-minute cooling period for the brownies. But in spite of my careful dolloping/spreading, the weight of the frosting caused it to sink a bit into the center of the brownies. Not the end of the world, just a bit messy to deal with.

For ease of melting the butter and chocolate, I melted them together, double-boiler style: a mixing bowl placed in a pan of simmering water. While the brownies were baking, I wiped that mixing bowl out and repeated the step for the frosting. In both cases, I just whisked the melted butter/chocolate mixture until smooth in that mixing bowl, rather than transfer the mixture to another bowl as mentioned in the recipe.

Here's how the recipe turned out: 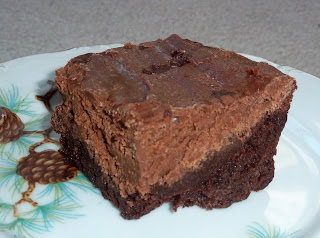 You can see in this piece where the frosting had sunk down into the partially-cooled brownie. I think next time I'd cool the brownies longer before frosting them. I think they'd still taste fine and would have a more even appearance as well.

And yes, these are just as rich as they look - but what else would you expect from a psychotic cookbook named Chocolate Chocolate?

Email ThisBlogThis!Share to TwitterShare to FacebookShare to Pinterest
Labels: eats