Get Carded: Birthday Card For A Boy

Hello! Due to a miscommunication, I didn't have a birthday gift or card to give to my nephew at the family birthday party last week. But once I found out what was on his gift list, I was able to make amends and send something his way.

Boys' birthday cards tend to stymie me a bit, probably because I don't have sons. And in the case of my nephew's birthday card, he had turned 12 - was that too old an age to refer to on a card? You know, like the birthday cards for littler kids that say cheery things like "Now you're two!" and stuff like that.

Decided to look through my collection of playing cards - many of them have interesting designs on the back that I like to use in crafting my greeting cards. Happened to come across a playing card that had the number 12 on it. It didn't look babyish in any way, so decided to include it in my design. 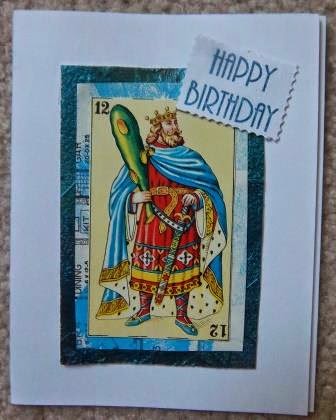 Close-up of that regal figure: 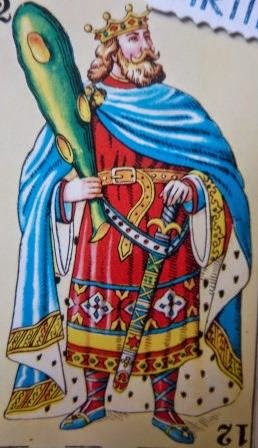 Not at all like the superhero figures my nephew would recognize, but I still thought this king was pretty cool. Wasn't sure what he's supposed to be holding in his hand, so looked up some info online:

The four latin suits are swords, batons, cups and coins. In each suit there are normally three picture cards - a king, a horseman and a jack or maid - and some numeral cards. Cards with latin suits are commonly used in Spain and in parts of Italy, North Africa and South America, and are also found in several other places. There latin suits cards in common use can be divided into two main types: Spanish suited and Italian suited.

So, it's a "knobly club" that the king is holding. Glad I found that out - otherwise I might have thought it was an overgrown zucchini.

Other than that confusion, I liked the artwork on the playing card. And I hope my nephew likes his birthday card!
Posted by aimee at 11:07 PM

Email ThisBlogThis!Share to TwitterShare to FacebookShare to Pinterest
Labels: get carded