Hello! My husband requested a batch of brownies to take to a presentation tomorrow evening, and out of my many recipes for that baked good, I knew which recipe I would bake: Beverly Hills Brownies, for which I won first prize in a brownie recipe contest several years ago - 2008, to be exact.

At that time, AAA Living Magazine (a publication of the AAA Motor Club), Michigan Sugar (a manufacturer of sugar made from sugar beets) and Zehnder's (a well-known restaurant in Frankenmuth, MI) sponsored a yearly baking contest, with a different baked good as the theme each year. (I believe that was the last time this contest was held). That year it was brownies, so I sent in a recipe I'd seen in a back issue of Gourmet magazine and had tweaked just a bit.

I eventually received word that my recipe was selected for competition. My recipe was in the "Old-Fashioned Brownie" category, one of four categories set up for the contest. I was to bake my brownies at home, then bring them in to Zehnder's on the day of the contest. Some of the brownies would go to the judges, while the rest would be sampled after the contest by the public.

I had never participated in a baking contest before, so had no idea what to expect. It didn't help that it was hot and very humid the day before (bad weather for baking), nor did it help that I'd injured my back early in the day I was to bake the brownies. By the time I left home to make the over two-hour drive to Frankenmuth, I could barely move! But I got there in time, joined by my parents and my oldest sister.  They'd come to cheer me on in the contest, and I really appreciated that!

There were a few planned activities while we waited for the judges' decisions, one of which was a behind-the scenes tour of Zehnders' kitchen - very interesting! I've eaten at Zehnder's several times since I was a kid; in my family, it was a special-occasion place. It's known for its family-style chicken dinners and German foods, along with a shop filled with mouth-watering baked goods (made on the premises) and gourmet foods. Needless to say, it was a thrill to tour this illustrious kitchen.

There was also a spin-the-wheel for door prizes. I won a cookie cutter which was supposed to be a sugar beet shape, but looked like a misshapen carrot to me. I traded that with my sister for the sugar cookie she'd won.

I had no particular expectation of winning my category, but much to my surprise, I won first place! Got a couple of nice prizes - one of which was dinner for two at Zehnders!

The grand prize winner was chosen from the four first place winners (one from each of the four brownie categories). It wasn't me, but truly, I was thrilled to have won first place - not bad for my first-ever baking contest!

And such were the pleasant memories as I dug out the recipe for Beverly Hills Brownies. Here it is, followed by a few photos and comments:

Preheat oven to 350 degrees. Butter and flour a 13-by-9-by-2-inch metal baking pan, knocking out excess flour. Melt butter with chocolate in large metal bowl set over saucepan of barely simmering water, stirring until smooth. Remove bowl from pan and whisk in eggs, one at a time. Stir in vanilla. Stir together flour and cocoa in a separate bowl and stir into butter mixture with sugar and salt. Pour batter into pan and bake in middle of oven until top is firm and tester inserted into center comes out with crumbs adhering, 40 to 45 minutes. Cool completely in pan on a rack, about 2 hours, before cutting into squares.

As you can see above, the first step involving ingredients calls for melting the chocolate and butter together in a large metal bowl over a saucepan, like so: 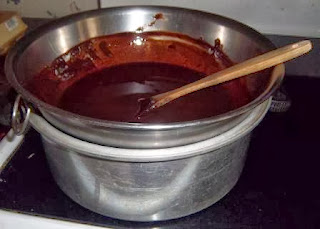 Could this step be done in a microwave? (you'd use a glass bowl, of course). I suppose so, but I've always done it as written in the recipe. It may sound like it'd be a pain to do it this way, but I've found that it goes pretty quickly - especially if you leave the butter out at room temperature in advance to soften a bit.

I should also add that although I usually use Ghirardelli brand chocolate chips in this recipe, I didn't have any on hand today, so used a bag of Hershey's Special Dark chocolate chips instead. Used Hershey's baking cocoa, which is the brand I've always used for this recipe. The recipe above states "Pioneer sugar" because we had to use a brand produced by Michigan Sugar. You can use any brand of white sugar you want! 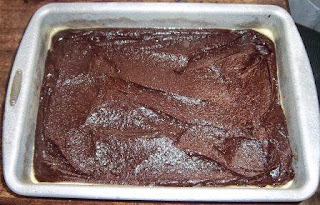 Above, the batter has been placed in the baking pan and is ready to go into the oven. The sheen you see is due to all the butter in the recipe! 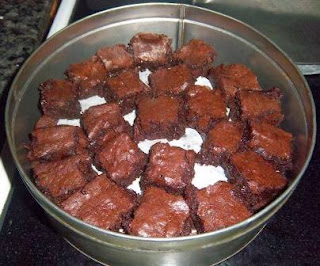 After cooling for a few hours, the brownies were cut and placed in a tin, ready to be enjoyed by 30+ college students tomorrow night. The brownies are even better if made a day ahead of being served, which is why I made them today. (note: the white you see below that layer of brownies is a coffee filter, which separates those brownies from another layer beneath them. I'd read a suggestion somewhere about using coffee filters to separate layers of baked goods, and I can report that it works well - and is much easier than cutting waxed paper to fit a cookie tin, which is what I'd always done before).

And how do they taste? Very rich and fudgy! I can still recall one of the judges at the contest, who pulled me aside after I'd won my prize - she wanted to let me know they were the best brownies she'd ever tasted.

There's a lot of good brownie recipes out there, but if you give mine a try, hopefully you'll agree with the judge who gave them such high praise.

I recall, however, that another judge did not - he was a columnist for the Flint Journal newspaper, and wrote a column about the contest shortly thereafter. He was full of accolades for the grand prize winning recipe, but dissed mine as being too rich. He didn't mention Beverly Hills Brownies by name, but it was obvious that's what he was referring to.  My mom sent me a clipping of the column, apparently not noticing the disdain he had had toward my brownies. Oh well, can't please them all!

Email ThisBlogThis!Share to TwitterShare to FacebookShare to Pinterest
Labels: eats