Hello! My curiosity was piqued earlier this year at a thrift store when I spotted an old baking pan. It was clearly a loaf pan, but was longer and narrower than my 9x5 pan. It wasn't in the best of shapes, but was only 50c, so I bought it.

While looking at the online version of the King Arthur Flour catalog recently, I saw this write-up of their tea loaf pan:


Shave about 25% off the time needed to bake a typical 1-hour quick bread with this longer, slimmer pan.
Well, there you have it - my pan has identical dimensions, so it's meant for tea breads. Here's what mine looks like:

Notice the vertical "stripes". They are slightly ribbed, so they show up faintly on the baked loaf; built-in slicing lines, I assume. Thus, the lady of the house would be assured of having properly delicate slices of bread for her tea sandwiches.

And of course, I know about the lines showing up on a baked loaf because I made the following in my pan: 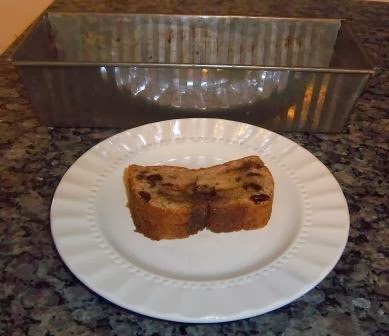 If you're thinking the recipe sounds rather rich, you're right. It's also quite sweet,even though I used a bit less sugar in the batter. Could also reduce sugar by omitting the filling.

The butter and sour cream made it quite moist as well. Consequently, it sunk a little upon cooling, as you can see above. Nevertheless, it's a nice snack to have with tea, which is what I did after taking the photo!