Hello! I'm a huge fan of the multi-talented Hanna Andersson and her iHanna blog. A couple of years ago I participated in the springtime version of her DIY Postcard Swap (she also runs another swap around Christmastime). I decided kind of late to take part in this year's spring swap, but got my 10 postcards done earlier today in advance of Monday's mailing-out deadline.

Here's how my postcards turned out, followed by some close-ups: 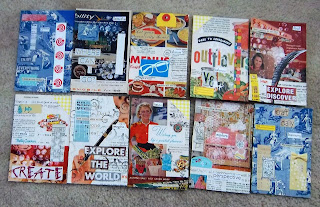 Two postcards have a more solid-looking background, courtesy of some endpapers from a vintage Nancy Drew book. The backgrounds of the other eight came from vintage Reader's Digest magazines (mid 50's/early 60's; a fun thrift store find!). 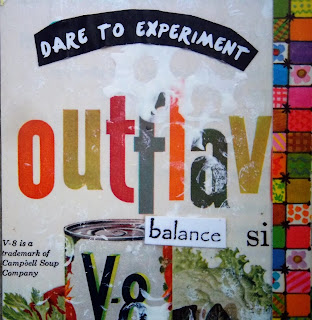 Close-up of a vintage V-8 ad; loved the colors. Added some white acrylic paint stenciling, a strip of patchwork from a 1970's greeting card, and modern bits in the form of a stamped word and a phrase cut from a magazine. 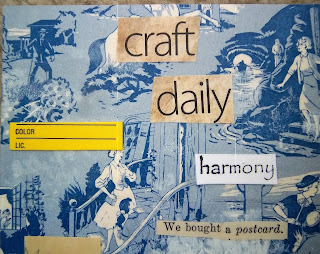 I couldn't resist the "we bought a postcard" phrase, which came from a 1930's grammar book. And I assume the recipient of my postcard will enjoy the reminder to "craft daily". 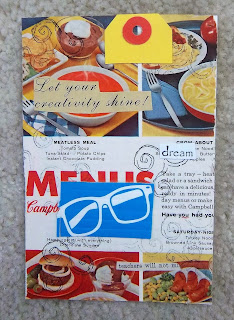 It almost seemed a shame to cover up the layout of this bright Campbell's Soup ad! But cover up I did, with rubber stamping, words, a sunglass image from a hotel coffee cup holder (or whatever those things are called), and part of a job tag from our auto repair shop. 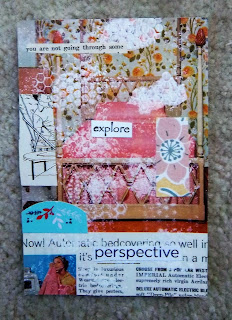 Pretty in pink: a Westinghouse electric blanket ad is loaded with  white acrylic paint stenciling, a vintage image of a man sitting on a chair, words and art paper scraps. 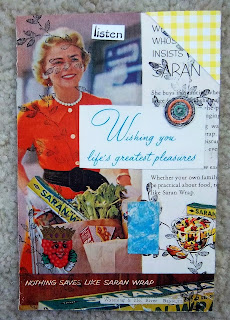 Above, our happy shopper insists on Saran wrap! I thought the produce sticker (just below the Saran wrap in the shopping cart) was appropriate. The added words and art paper bits may not be as appropriate, but they were a fun addition. I think I went a little haywire, though, with the leafy rubber stamping; shouldn't have put it over the woman image. But since I'd already affixed the ad to my postcard blank, I wasn't going to pitch it. 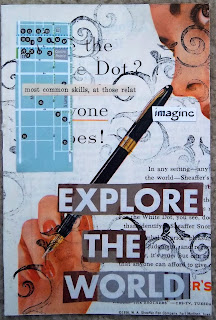 A woman is ready to "explore the world", or maybe at least write about it, with her Sheaffer pen. The snippet of a map (forget what city) near the upper left-hand corner fits the saying.

And "explore the world" I will, at least vicariously, through this DIY Postcard Swap. You see, the swap is international; Andersson herself is from Sweden.

The previous time I did the swap, two of the 10 addresses I was assigned were from other countries. I was hoping that some of the 10 coming to me would also be from other countries, but that didn't happen. Nevertheless, between the 20 outgoing and incoming addresses, I learned a little geography from looking up unfamiliar locales.

Thus, I anxiously awaited the release of the 10 addresses I would use for this year's swap. They were sent this afternoon, so I learned I am to send four cards to California, two to Colorado, one to Arizona two to the UK - and one to Andersson herself! I was really happy to get her address - it'll give me a chance to write a note of thanks for doing the swap, having such a fun blog, and being a creative inspiration to me and countless others over the years.

If you'd like to see what I mean about her fun blog, and to learn more about the DIY Postcard Swap, go here.

Email ThisBlogThis!Share to TwitterShare to FacebookShare to Pinterest
Labels: Made it